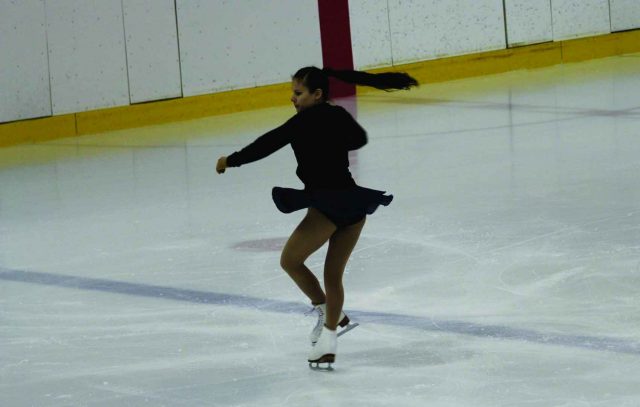 Just under a dozen local skaters participated, competing against dozens of skaters in the region from January 29-31 at the Centre Sportif des Copains in Ste. Martine.

“For some of them, it was their first time competing. They were shy and a bit nervous, but they did it and I’m very proud that they went for it,” said Bethany Douglas, one of the club’s coaches.

“I didn’t think I was going to place because there was a lot of other girls and they were doing pretty well,” said Diabo.

Diabo credited her movement for catching the judge’s eyes.

“A lot of the skaters are stiff and don’t move a lot. They have their arms in just one position and some of them don’t even have a smile on their face,” said the 15-year-old skater. “My mom says I’m ‘flowly,’ so I go with the music and things like that.”

Leading into the competition, Diabo focused on landing her single Axel.

“I wasn’t really landing for the couple of practices that were before the competition,” said Diabo. “I was pretty nervous about that. I didn’t land my first one, but my second one, I landed.”

“Compared to other ones I did, that was my best solo,” said Goodleaf.

The 12-year-old Kuper Academy student has been on the ice for as long as she can walk, and has been competing for the last seven years.

“I did really good jumps and spins,” said Goodleaf of her Lutz, Axel and flip.

She’s been practicing her single Axel since last spring.

“I landed it, but it wasn’t perfect,” said Goodleaf.

This is Goodleaf’s first medal since moving up to a higher competition level in the fall.

Jillian Diabo placed fourth in the Pre-Juvenile division, while Sunshine Stacey ranked eighth among the 18 skaters who competed in the Star 5, 13 years + division.

“My jumps weren’t as good as I hoped they would be, but that’s okay, I’m happy on what I got,” said Stacey.

“I’ve been working a lot on my footwork and arm movements, things in between spins and jumps to make it look more presentable. I think I did well on that; I got a higher rank in the category than the one in Chateauguay.

“My spins came out really nice,” said Stacey. “They come easily to me, it’s my favourite thing to do in competition and in practice.”

Skaters below Star 3 received ribbons for the competition.

“For the younger skaters, some of them have a set circuit that they have to do. They’re able to practice that in advance.

So for that level, the judges look for how well they execute each of the elements in it,” explained Douglas.

“As they get older, they choose a piece of music and have to put their own choreography to it, so the judges look for how well they can string together elements to a set piece of music.”