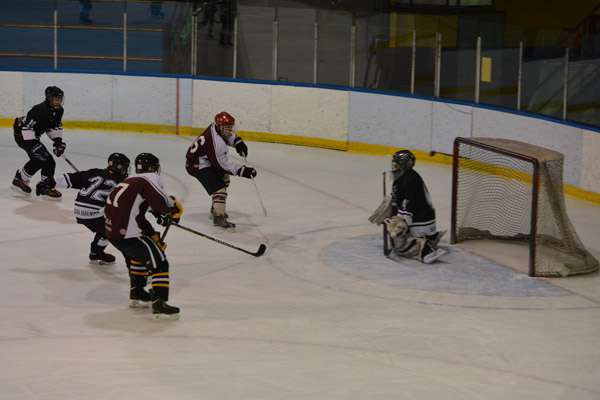 Kawera’shátste McComber led KSS with a take-no-prisoners offensive performance, as the Bantam hockey team heads into its last game of the regular season before the playoffs. (Daniel J. Rowe, The Eastern Door)

The win moves Survival to 5-3-0 on the year and firmly in second place behind undefeated Bialik High School (7-0-0).

Wednesday’s game started cagey with neither team able to crack the goose eggs by the end of the first period.

Halfway through the second period, Survival broke the game open when winger Cole Two-Axe shoveled in his first of two goals on the afternoon.

“We got the goal and we go the momentum,” said Two-Axe.

Fifty-nine seconds later Kawera’shátste McComber rifled home his first, but far from last of the game, as KSS started to control the game.

“We took their positioning away from them,” said Two-Axe.

Survival added another and went into the final frame up 3-0.

McComber spoke about what KSS did differently in period two.

“We changed the lineups a bit, and played a tight game,” he said. “We went into our positions and each played where we had to go.”

Up 4-0, Assumpta gave Survival a minor scare when the team scored back-to-back goals within a minute in the last five minutes of the period.

“I felt that the second goal was my fault, so I just went all out, and tried to get it back,” said McComber.

Coach Dave McComber knows what his team needs to do to knock off the favourite and take the banner this season.

“Limit mistakes for sure,” he said. “Keep the puck out of the middle. They have some really strong skaters. They have about three or four guys that can really carry the play, and we have to be able to play a little bit more disciplined in terms of how we’re seeing the ice, where we’re going to throw the puck, (and) not being flat-footed on our heels.”

Survival had to kill a handful of penalties Wednesday that will be much tougher against an opponent like Bialik.

“Obviously we can’t be sitting in the penalty box like we were in the last few minutes here (today),” said coach McComber. “Against a team like that, they’ll kill us.”

For Two-Axe the answer to Bialik is a simple one. “We have to do what we did today,” he said.