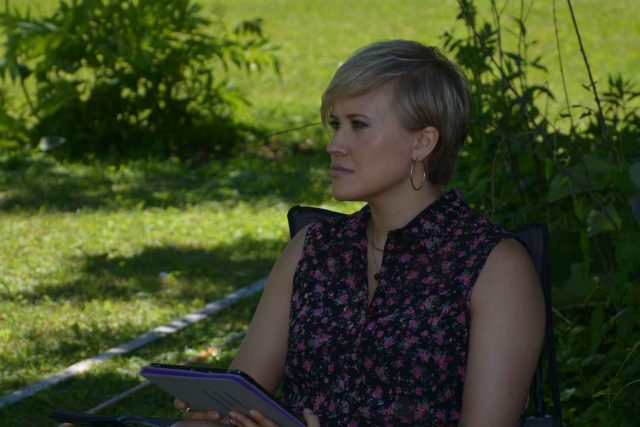 Brittany LeBorgne’s name was read alongside comedy legend Catherine O’Hara Tuesday, as the 31-year-old Kahnawake actress becomes the first in the community to be nominated for a Canadian Screen Award for a comedy role in a TV series.

The screen at the front of the TIFF Bell Lightbox cultural centre was black as hopeful actresses waited to see the nominees for the Canadian Screen Award best actress in a continuing leading comedic role.

The first box illuminated a face familiar to anyone who has been to a Turtle Island Theatre production, read an Eastern Door newspaper or watched APTN in the past couple of years.

“All of a sudden, my picture appeared on the screen and the guy said, ‘Brittany LeBorgne for Mohawk Girls,’” said LeBorgne. “It was a total shock. I really wasn’t expecting it considering I feel like my career is just starting. This is the first big thing I’ve really done, so it’s something you hope for eventually or down the road.”

Leborgne was tipped off before the nomination happened.

“When I got there, someone from the Canadian Screen Awards media said, ‘hi Brittany. I’m Julie. After the press conference is done, I’m going to take you and go to all the media,’” said LeBorgne. “I was like, ‘okay?’”

Handlers also directed LeBorgne to sit in one of the front two rows.

“I was so excited, and so happy for her,” said the show’s creator and director Tracey Deer. “All four girls they work so hard, and I push them so hard and it’s so amazing for one of them to have their work recognized.”

“She is so amazing,” said LeBorgne. “The first time I was introduced to Catherine O’Hara were two big films: Home Alone and Beetlejuice, two films I loved growing up… I’m so beyond honoured to be nominated in the same category as her.”

The Rezolution Pictures dramedy was not done getting nods for the night. Mohawk Girls also picked up a nomination for Best Comedic Series, and Deer was nominated for directing the episode “What’s Your Number.”

“That is such a huge nomination, and we’re really in there with these big budget, big broadcast show,” said Deer of the show being nominated alongside Mr. D, Tiny Plastic Men, Young Drunk Punk, and the favourite to win: Schitt’s Creek.

Two of Deer’s documentaries were nominated for Gemini Awards, which became the CSAs when the awards merged with the Genie Awards.

Deer’s documentary One More River: The Deal that Split the Cree was nominated for a Gemini award in 2005, and her 2009 documentary Club Native won a Gemini for non-fiction writing, and the film won for best Canadian multi-cultural program.

Writer Cynthia Knight was nominated in the writing category for the season two finale “Rez Balls.”

“I’m blown away from all the support I got on Facebook from family, friends – Native and non-Native – and just the community members in Kahnawake,” said LeBorgne. “It’s been amazing how many of them have wished me congratulations or ‘I’m so proud of you.’ Kahnawake is such a great place.”

Being in the public light in Kahnawake has meant taking her share of criticism, and LeBorgne was thrilled to see such positivity beaming from the community.

“We always say Kahnawake is such a negative place, but saying Kahnawake is a wonderful place is also true,” said LeBorgne. “I definitely saw the wonderful side of Kahnawake yesterday.”

LeBorgne is also nominated for the 2015 CSA FanZone Screen Star, where fans can vote online.

Cast and crew got more good news this week when APTN announced that it would produce a fourth eight-episode season of the show that will begin shooting in the spring.

The double dose of good news was a thrill for the show’s creator.

“You work hard to do this job that you love, and hope that you’re getting into people’s home and making a difference, and getting people talking and laughing, and all those things, but to then have your industry recognize your work as one of the top is very validating,” said Deer.”