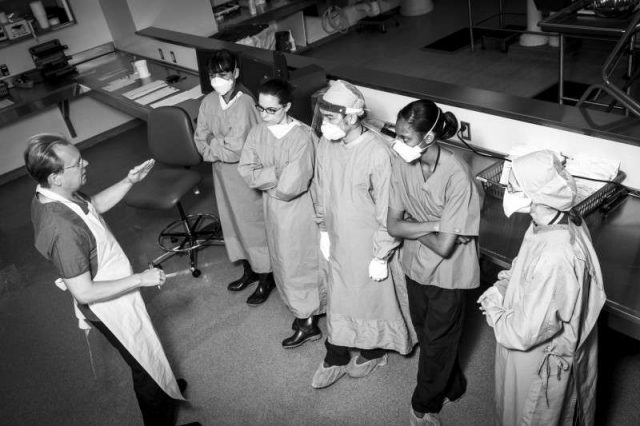 Kona Williams is the only Kahnawa’kehró:non to pursue a career in forensic pathology. (Courtesy Kona Williams)

The New Year marked a new chapter for Kahnawa’kehró:non Kona Williams with the start of her first job as a full-fledged forensic pathologist at one of the most extensive forensic science facilities in North America.

“It’s a little overwhelming, but I trained 14 years for this, so I think I’m ready, and in the right place,” Williams told The Eastern Door.

She began her position last Monday at the Centre of Forensic Sciences (CFS), a laboratory in Toronto that provides forensic science services to law enforcement agencies in Ontario.

“We are absolutely delighted that Dr. Williams has joined our team,” said Dr. Michael Pollanen, the Chief Forensic Pathologist for Ontario. “It is young doctors like Dr. Williams who are the future. She is a pioneer and she is transforming the face of forensic pathology in a very important area of public service.”

Forensic pathologists are medical doctors with specialty and subspecialty training in the medical and legal investigation of deaths.

Williams is the only Indigenous person in Canada that works in the field, as far as is known.

“On that basis, I believe Dr. Williams will make a huge contribution because she is able to incorporate that First Nations perspective with perspective of forensic pathology. It is clear that there are many issues that will benefit from her training and experience,” said Pollanen.

For Williams, it’s about an opportunity to make a difference.

“I’m in a position to hopefully make some changes regarding the relationship between Indigenous people and the death investigation system, as well as being able to do some good research into how and why Indigenous people die in this province,” she said.

The department that Williams is employed with staffs around 60 people that together investigate the deaths of about 2,500 people per year in Ontario.

“I perform autopsies on individuals who died suddenly, unexpectedly or under criminally suspicious circumstances (for example, a homicide),” explained Williams. “I am able to take all the information I gather, using science and medicine, to come up with a cause of death for the deaths I investigate.”

Her responsibilities may also include testifying as an expert witness in court and since the centre is a part of the University of Toronto, she will be training the next generation of forensic pathologists.

“My work is so interesting it doesn’t feel like work at all. If you have that, it’s worth more than anything,” said Williams.

The new job resulted in over a decade of schooling.

Williams received an honours bachelor of science in microbiology and biochemistry/molecular genetics from Dalhousie University followed by medical school at the University of Ottawa in 2005.

“During my first month, I met an amazing teacher. She was a pathologist. I had no idea what that was, so I spent my elective time in the Department of Pathology and Laboratory Medicine, and fell in love with it,” said Williams.

In 2009, she began a five-year residency in Anatomical Pathology in Ottawa and a yearlong post-graduate fellowship at CFS.

“Now that she has completed the required training, passed her certification exam, she is now practicing independently in our institution.”

Williams was offered her current position in November on the same day that she received the news that she passed the Royal College of Physicians and Surgeons of Canada examination for forensic pathology.

“So far it’s just as fun as it was as a fellow, with a whole lot of added responsibility,” said Williams. “I’m excited to finally be able to do the cases entirely on my own, but lucky to be able to ask for help from senior forensic pathologists if I need to.”