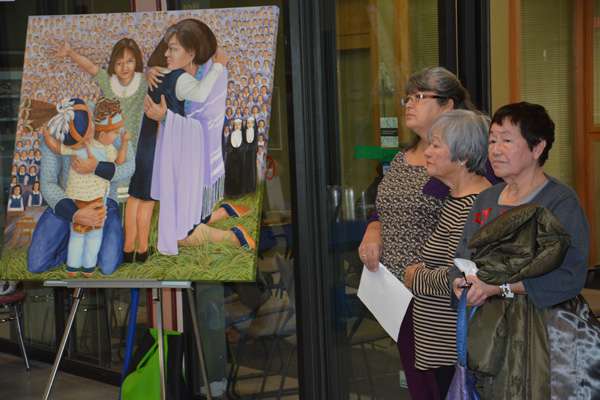 Kahnawake artist and teacher Owisò:kon Lahache drew on her family, passion for teaching, and artistic gift to paint a commemoration of the genocidal practice of residential schools. (Daniel J. Rowe, The Eastern Door)

The faces of hundreds of students, dressed in matching uniforms looking straight forward frame a scene of a mother and daughter, and father and son connected by a young girl dressed in a ribbon shirt with her arm raised.

“The painting is about resilience, about how we adapt as Onkwehón:we people,” said Lahache. “We still find our roots. We find what is important to us, and we honour that.”

Deer was not the only one wiping tears from her eyes Monday, as onlookers at the Services Complex lobby got their first look at the painting. The tears this week joined the ones Lahache shed while creating the work.

“I had it in my dining room while I was painting, so that I could look at it and really try to get the message across of what happened,” she told The Eastern Door. “I’d be sitting there, and I’d start getting emotional because I had all these little faces looking back at me.”

Lahache is very familiar with the residential school policy and practice as a teacher at Kahnawake Survival School.

“I know about how the four major churches came in and that was their directive by the Canadian government: to take away the culture of the Native people who were going to the residential school,” said Lahache. “They were instructed that they were to remove the Indian-ness from the children.”

As an educator, Lahache believes strongly in the importance of education as a means to empowerment. She also remains troubled by the unsettling fact that the residential school system resulted in such a high number of deaths among its students.

“As a teacher, I know that education is important for us to be able to be on the same space where we can negotiate with outside government, but at the same time, I look at it and I say, ‘no school should have a mortality rate.’ No school,” she said.

“No school should have a mortality rate of 50 percent. Canada has a mortality rate of 50 percent of the kids that were taken, ripped out of their mother’s arms and brought to residential school. When you take a look at the reality and the numbers of what happened in trying to remove our culture from us, it’s atrocious. It really and truly is Canada’s apartheid, Canada’s way of getting rid of us.”

The painting was commissioned as part of the Family and Wellness Center’s Indian Residential Resolution Health Support Program.

“The whole point of the painting itself is a test of the resiliency of our people, of all Onkwehón:we people across Turtle Island, the strength that they had to put forward in themselves to endure the process of the residential schools, and coming out of it; that light that they have in themselves to push forward,” Merrick Diabo, who coordinated the project.

The painting is up and will hang permanently on the wall leading to the library at the Kanienkehá:ka Onkwawén:na Raotitióhkwa Language and Cultural Center.

The idea for the painting came after Diabo spoke to Deer in the summer, who recalled a painting of Lahache’s that had an impact for her.

“She had an exhibit with a few other artists, and I went and saw it, and thought it was so beautiful I wish I could have bought one,” said Deer.

“There was a little girl there looking at her culture, and I said, ‘it was so beautiful.’ That little girl wanting to learn so much about her culture and her language,” said Deer. “I told him how I felt about that painting.”

The two decided a commemorative painting would make a fitting project that also includes a survey that was launched Monday.

“The survey is to see where the community is at in terms of how many surviving students there might be in the community and just a basic knowledge of the Indian residential school system,” said Diabo.

The painting also includes the powerful image of a desk with an empty chair meant to depict those who did not return from residential school. Opposite the desk are two nuns creating a juxtaposition not easy to miss.

“It depicts the importance of family, it depicts also those that didn’t come back, and who was responsible for that,” said Lahache.

Lahache drew on her own history to tell the story in the painting.

“My father went to residential industrial school, and so there were things that he couldn’t do because he was taught not to feel, not to have emotion, not to embrace life that is really part of our culture,” said Lahache.

“I’m looking in the painting and seeing things that he couldn’t do, things that were removed from him. Even though I knew he felt them emotionally, he couldn’t express them…For me, I’m a huggy person. I like to hug people because some people don’t get that.