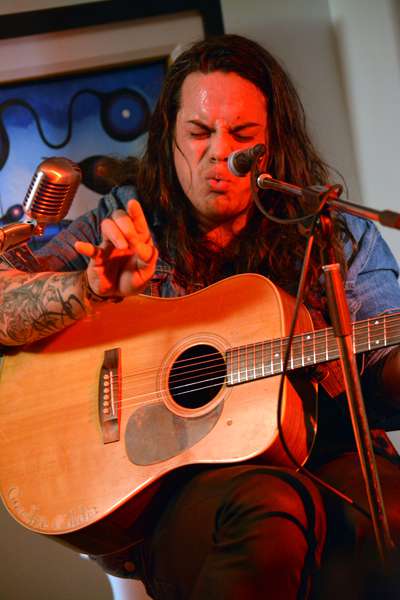 Logan Staats describes himself as a folk singer that acts like Keith Richards.

The longhaired, tattooed-covered Kanien’kehá:ka singer/songwriter that hails from Six Nations headlined his first Montreal show last Friday to a packed audience at the Ashukan Cultural Space.

The intimate acoustic set included material from his debut album, Goodbye Goldia,  which was released during the summer.

The album, which was produced by Derek Miller, is a collection sad songs ranging from love ballads about former flames to dodging the big bad ol’ tax man.

“Music has always just been a healing process for me. I pick up my guitar, as cliché as that sounds, and just kind of play it out. It’s therapy for me,” Staats told The Eastern Door. “When I’m happy, I don’t find myself touching my guitar too much.”

Staats will be releasing a music video for one of the tracks titled “Ash’s” in the coming days.

“It is just a straight up love ballad. It is a song I wrote for one of my very first girlfriends years ago. It’s like a crowd favourite, everyone really likes that song,” said Staats.

The video will feature a familiar face for many Kahnawa’kehró:non – local actress Kawennáhere Jacobs.

“It was really cool to work with him. It was a super relaxed shoot compared to what I’m used to,” said Jacobs. “I think we got some really nice shots and I’m really looking forward to how it’ll turn out.”

Although still on the cusp of his debut album, Staats said he’s already been plugging away on his second record.

“My new one, I’m not going to confine myself to one producer. I’ll probably be working with a couple of different ones,” said Staats.

He said he plans to put a lot more instrumental work into his sophomore album.

‘The one I did with Derek was live off the floor, just kind of raw. The one I’ll be working on now will have violins, banjo, upright bass, drums – it will be a lot more work instrumentation-wise,” said Staats.

The 27-year-old started performing music in his early teens and used to be the front man for Ghost Town Orchestra, which picked up an Aboriginal Peoples Choice Music Award last year for best rock album.

“We did really, really well, then I just kind of quit because it wasn’t really right for me. I started doing this and it has really taken off.”

This year, Staats has his eye on a Juno nomination.

“I feel like I’m almost at the top of the Aboriginal music scene right now. But, the music scene as a whole is much larger,” said Staats. “I really wanted to try to break out and not pigeonhole myself in that market. You can live comfortably in that bubble, but I just feel like I want to exceed that and want to do more than that and open it up for Aboriginal musicians.”

While Staats may have been the headliner at Friday’s show, he wasn’t the only Kanien’kehá:ka to hit the stage.

Although he broke a guitar string on stage, Morris said the experience was “awesome.”

“It was cool to see people out there. We basically packed that small space,” said Morris. “I think the spirit of it was really good.”

Morris, along with Esther Pennell, Laura Niquay, Melissa Girvan, Matthew Vachon, DJ XS7, and Moe Clark, each had the opportunity to perform a song each as a part of a 10-day workshop by Musique Nomade.

“We had workshops on branding, we did the ABC’s of the music industry seeing each role from manger to publicist. They also had studio recordings for new songs, so they each recorded two new songs,” said Moon-Hee Kim, the interim-coordinator for Musique Nomade

The intensive program is a pilot project intended to provide emerging Indigenous artists the tools and knowledge to navigate the ins and outs of the music industry.

“It was an eye-opening and inspiring experience. I learned a lot about the industry and how it’s changing,” said Morris.