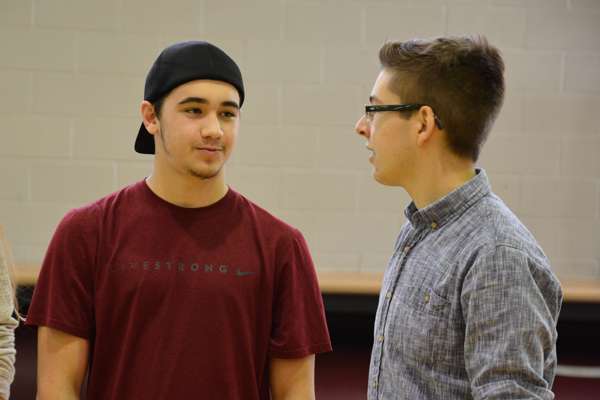 Students from KSS and McGill University paired up as part of a mentorship program between the two schools to help high schoolers gain confidence for the post-secondary world. (Joseph Czikk, The Eastern Door)

Kahnawake Survival School students got a chance to peer into the telescope of their post-secondary futures last week during an afternoon of guidance and fun, organized alongside several McGill University student-mentors.

About 15 McGill students ranging in all different academic backgrounds visited the same number of grade 11 KSS students Friday to chat about making the transition from high school to CEGEP or university.

“It’s a way for the (KSS) students to network and when they’re done high school they have someone in their program that can help them with issues, whether it’s with papers, giving them pointers or how to make it in CEGEP,” said guidance counselor Petal McComber.

She added that the afternoon was the second in a series of three events aimed at making KSS students more comfortable with their future after high school. The next event, on November 24, will see KSS students shadow their McGill mentors for a day at the downtown Montreal university campus.

The event came days after KSS was treated to a mini career fair with several Canadian universities Tuesday.

Tahothoratie Cross, a grade 11 KSS student, wants to go to CEGEP, but, like many students, worries how he’ll handle the workload.

Many high school students, including Cross, worry about not having anyone around to ensure their work is done after high school.

“It’s really a learning experience to see how independent you have to be,” he said. “The (mentors) said it does get a little bit easier, you get used to it and you start to figure out your own system to get the work done.”

Belle Phillips, another grade 11 student who wants to attend both CEGEP and university for nursing, said no one else in her grade wants to go into her field of choice. It means she’ll have to make all new friends and leave those she’s had since kindergarten.

“I do have fears that I’m not going to be able to do it, but I think I’ll be able to. There’s always that part in the back of my mind that’s scary,” said Phillips. “But I find it’s a good opportunity for us to meet up with other people and try to branch out.”

Sitting near Cross and Phillips during the first activity of the day was a third-year McGill mentor in materials engineering, Hillary Williams.

It was McComber’s idea to reach out to contacts at McGill for student-mentors who could match the interests of KSS student contemplating the jump to CEGEP.

Last year was the first in which the two schools hooked up for the program.

“The point is to encourage the grade 11 students to pursue post-secondary education because they’re all capable,” said Williams. “They don’t know who to get answers from so we’re really just here so they’ll know someone in the field that they’re interested in.”

Some of the students’ natural fears stem from the social aspect, in going from a community school to places like Dawson College, one of a number of large, busy CEGEP schools on the island of Montreal.

McComber said she now visits new KSS students during their first few weeks at Dawson College. She even had a space at the CEGEP this year where any Aboriginal student could drop by.

“I worked with them to help them transition and I was able to help some of them,” she said. “It can be scary, so that’s something new I did.”

After the McGill and KSS students got to know one-another, they all headed to the gym for an icebreaker activity. A good ole game of volleyball, KSS against McGill, capped off a positive day of mentorship. Both sets of students had to organize the activities themselves.

McComber said the events are designed to try and make the transition for KSS students smoother.

“I try to encourage them to ask for help, and this is part of it,” said McComber. “If they have this person (at McGill), even when they’re in CEGEP, then they can email them and get pointers about everything. That’s what the program is about.”