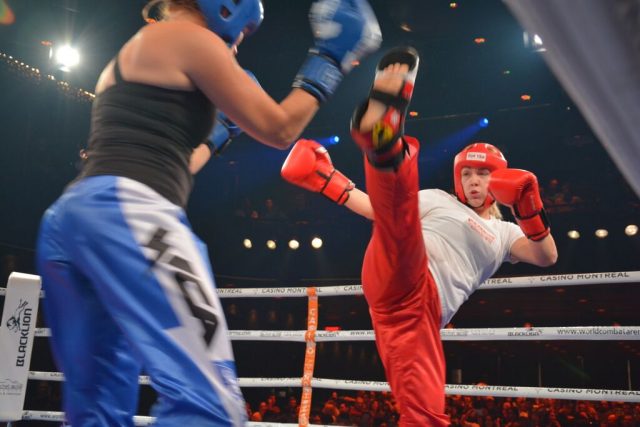 All three Kahnawake-based fighters lost their bouts at Monday night’s Aisudan: The World Combat Arena at the Montreal Casino.

Justin Prince (kickboxing), Bradley Bomberry (tae kwon do) and Karley Diabo (tae kwon do), representing Fraser Core-Fit, all fell to their opponents in close bouts. All three event critics relayed a similar refrain for the three fighters – a lack of fitness – while praising each fighter’s natural ability.

Coach Mark Fraser of Fraser Core-Fit told The Eastern Door that he didn’t agree with the judging, even if his fighters need to work on their cardio.

“I’m not blaming it all on the judges but I think some of the numbers didn’t add up,” said Fraser. “We’re going to go back to the drawing board and I guarantee you we’re going to come back stronger than before.”

Justin Prince, 19, was first on the fight card as he took on Cedric St-Ourse of Granby. A fighter with six months experience, Prince dropped his first decision on a disqualification in September. His objective prior to Monday night was to improve his kicks.

An athlete by trade, having played football and basketball, he eventually fell into fighting through a friend.

“First day I tried it I got addicted,” he said.

Throughout the three rounds, Prince and St-Ourse gave each other much to handle, with St-Ourse arguably coming out on top for most of the fight. Critic Andre Gilbert told Prince he needs to work on his cardio and Yves Lavigne said his defence was lacking.

“I actually thought I won but it is what it is,” said Prince after the fight, noting that he hit St-Ourse with a perfect right hand at one point.

Prince said he wanted St-Ourse to keep throwing strikes so he’d expose his body. The tactic may have ultimately worked against him.

“I caught him with a couple kicks but he’s a tough dude, he kept coming forward,” said Prince.

In his third fight in as many months, 20-year-old Bradley “Bomb” Bomberry took the stage against Quebec City’s Jocelyn Bujold. Bomberry started training in tae kwon do four months ago and won his first bout by unanimous decision. He felt his greatest strength is his kicks and he came into the fight working on his striking and conditioning.

On representing his community, Bomberry said with a laugh, “It’s better than getting in trouble. I want to be a good fighter.”

He was easily the more impressive fighter in his first round, striking Bujold with upper-cuts and several kicks, some of which looked impressive.

Unfortunately by the second round Bomberry was visibly tired. Labonte, the ‘Simon Cowell’ of the trio of critics said that had his endurance been stronger he would have won the fight.

“You’ve got the body like Adonis, you hit like thunder but only in the first round,” he said. “After that you fought not to lose.”

Lavigne told Bomberry that he had an amazing first round but dwindled thereafter. Even so, the critic praised Bomberry’s movement and composure when he knew he was in trouble.

Karley “Machine Gun” Diabo was last in the trio to fight. The 29-year-old mother of four took on Melanie Roy of Drummondville in an old-fashioned slobber-knocker.

Defence was minimal in this fight and both fighters unleashed a hail-storm of strikes in the first round. The pair tired out during the second and third rounds, but still managed to keep the bout exciting, throwing near-constant punches.

The match could have gone either way but the judges thought otherwise favouring Roy.

Labonte was short but sweet with Diabo after the fight: “I don’t think it was your best fight tonight, but please don’t give up. We need to see you again.”

Lavigne told Diabo that she went out like a tank in the first round but didn’t have anything left after that.

“You have the tools, you just have to put it together,” he said.

Diabo said she felt good as she sat in her dressing room after the fight.

“I’m pleased with what I did considering there was a lot going on in the last couple months. I didn’t train as hard for this fight as I did for previous fights,” she said.

Diabo, who has twin 5-year-olds, an eight-year-old and a 10-year-old, said her next fight will be in December. She’ll be working hard on her conditioning.

Her coach Fraser, who has represented Kahnawake in the past both internationally and nationally, agreed. He was proud of all three of his fighters, win or lose, but took responsibility for Diabo’s loss.

“Tonight wasn’t her night and that rests on my shoulders as a coach,” Fraser said. “Some of the judging wasn’t on our side but next time we come back we’re not going to leave it to the judges.”