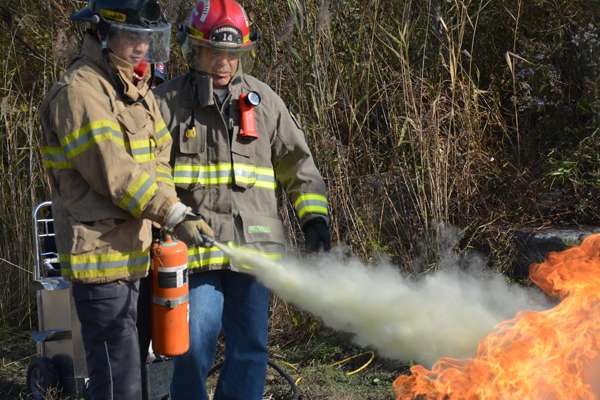 College students from John Abbott’s Pre-Hospital Emergency Care program were in Kahnawake earlier this week to get a taste of what their future careers will entail.

On Wednesday students in their third-year of the program spent the afternoon outside Goodleaf’s Auto and Scrap Yard learning the ins and outs of fire suppression and vehicle extrication from the Kahnawake Fire Brigade (KFB).

The two activities are something teacher Louis Nikolopoulos said the school cannot simulate in the classroom for the future EMTs.

“We want to try to bring as much as possible the reality of the road into the classroom. There’s certain things that we can simulate, other things we cannot,” he said.

Nikolopoulos said it is important for the students to be exposed to all aspects of the job – not just the medical side.

“We live in a city where anything can happen and it is good for them to have a basic knowledge of how things operate and their role within that specific system,” said Nikolopoulos.

KFB lieutenant Karonhiio Curotte gathered half of the students around a vehicle to demonstrate vehicle extrication, while the others learned how to put out a fire from lieutenant Barry Diabo.

“This is just a taste of what they might experience on a real call,” said Curotte. “They all carry these knives, tools and stuff like that are supposed to be designed to break windows. We show them which ones work and which ones don’t. They realize fast that some of the tools they bought are crap.”

The training also provided EMT trainees with the opportunity to experience the other side of an accident.

“At school we don’t get to really experience this,” said student Amanda Purcell. “We do simulations, but they’re all in class, but this is much more real for us.”

Six of the students sat in the vehicle to understand what it feels like to a patient inside of vehicle when it is being torn apart by a fire department.

“It’s nice to get to feel what the patients feel like, so we know how to better care for them,” said Purcell. “I was inside the car, so I can understand why they’d be panicking. That helps me now to be able to reassure them more about what’s going on.”

Purcell added that Kahnawake’s instructors were top notch and helped to fully understand each step.

“We’re trying to give them that experience before they go out in the field and have to deal with stuff like that this for real without any knowledge,” said Curotte, “It’s noisy, things are flying everywhere. Things are breaking, and smashing and they have to try to keep their patient calm while they’re covered and not seeing anything that is going on.”

John Abbott College has been partnering with the KFB since 2010 to help students understand what they are getting into as a future career. In addition to Wednesday afternoon’s demonstration, a handful of the students, including Purcell, will be interning with the KFB before they graduate.

“We’re different than all the other ambulance services that they deal with. When they come here, they get the fire experience, the extrication, the rescue –everything,” said Curotte.

Curotte said he sees the partnership as a recruitment tool for the department in the long run.

“We’re hoping kids from town see their program, working with us, and maybe think ‘I’ll do that program,’ and eventually coming to work here as a paramedic or firefighter,” said Curotte.