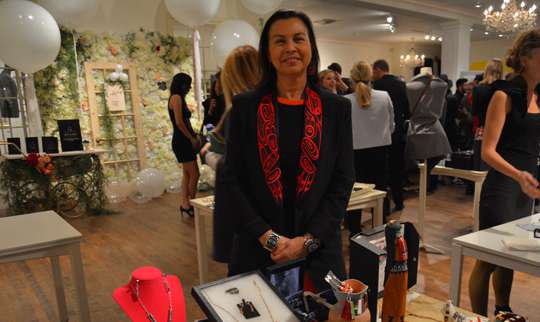 Kahnawa’kehró:non Konwatsi’tsa:wi Meloche was among the dozens of accessory designers showcased at the tradeshow for this season’s Montreal Fashion Preview. (Jessica Deer,  The Eastern Door)

Two Indigenous artists were among the eight fashion designers and a dozen-or-so selected jewelry, handbags and accessories designers showcased at the fourth edition of Montreal’s Fashion Preview earlier this week.

The three-day event, which took place from Tuesday to Thursday on the fifth floor of Maison Ogilvy, drew hundreds to see this season’s new and hottest collections in Montreal’s fashion industry.

“You can accessorize an outfit and totally change it with a bag or jewelry. I think Fashion Preview this season is having a lot of success because of this good mixture of products,” said organizer Emanuela Lolli.

Lolli launched Fashion Preview in 2013 to replace the now defunct Montreal Fashion Week, and as a place were Montreal designers come together to present their latest collections to selected journalists, buyers and guests.

“Montreal without a fashion week would be total nonsense,” said Lolli, who is originally from Italy, but spent 20 years working in Paris’ fashion industry.

Lolli wanted to include Indigenous designers this year because of her personal taste.

“I like Native art, and I respect the message that it’s creating,” she said, “On a more business point of view, I think that in a tradeshow, it is important to show different designers that represent the place of where you live.” 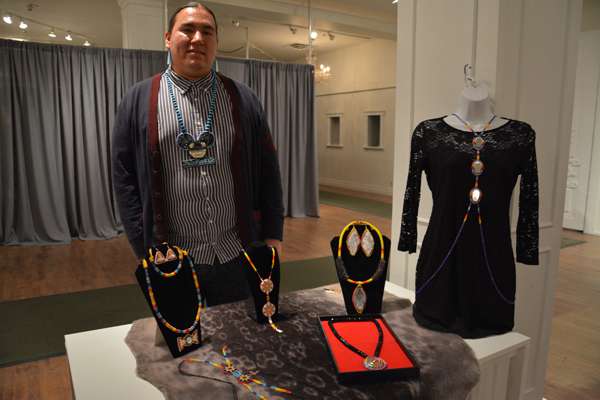 Kahnawa’kehró:non Konwatsi’tsa:wi Meloche said she was honoured and proud to be invited to participate in the event, but said her experience over the past three days evoked mixed feelings.

“I had designers come here looking at the jewelry saying ‘I could get some great inspiration.’ But, I said you have to collaborate with First Nations – do not just take what you see,” said Meloche.

Meloche uses a lot of quillwork in her jewelry, as well as collaborates with Zuni Pueblo stone in-lay designers in the Southwestern United States.

Meloche said her main purpose to participate at Fashion Preview was to network to get the ball rolling in creating a Canadian version of the Indian Arts and Crafts Act of 1990 – a truth-in-advertising law in the United States that prohibits misrepresentation in marketing of Indigenous arts and crafts products.

“When you look at businesses like Urban Outfitters, it is very beautiful that they have been inspired by Native American traditional art and creations, yet there’s no collaboration,” said Meloche, “So, to see someone at this higher level perhaps collaborate would be quite an honourable thing.”

For David Charette, a Two-Spirited Ojibwe man from the Wikwemikong First Nation, being a part of Fashion Preview was an overwhelming experience.

“It is pretty awesome. I’ve never been in a pretty high-end fashion show,” he said.

Charette’s designs combine the traditional art of beading he learned from his sister when he was 16 years old with contemporary styles. He focuses on using bright colours and sealskin to create signature pieces like fully beaded body chains.

“It appeals to me because it is not just the regular old bandolier bags, headbands, or moccasins or anything like that. It’s taking something we had already and modernizing it into something brand new,” said Charette.

The bright colours of Charette’s work did not go unnoticed from the eyes of hundreds of Fashion Preview guests.

Savannah Scott and Sydney Anna, stylists and the duo fashion columnists behind IXDaily’s Trollsen Twin Talk, were drawn to pops of colour in Charette’s designs.

“A lot of the fashion in Montreal is really black and white. People really like earth tones in Montreal, and are really not into colour. Obviously I am,” said Scott pointing out the yellow houndstooth coat she was wearing on Wednesday evening.

The two said this is the first time they’ve seen Native designers featured in a Montreal fashion show.

“We always come to Ogilvy events, especially when it is new talent or emerging brands,” said Scott, “It is really cool that they have booths with more diverse population this year. Last time we were here, it was all the same usual brands.”

“They never did anything like that at Fashion Week, either,” added Anna.

Lolli said she plans on continuing to include Indigenous designers in future Fashion Preview events.

“I really like what they do. I’m going to be organizing Fashion Preview March 2016 right after the French fashion week – I would really like to have a fashion show organized by a Native designer. That would be very, very interesting,” said Lolli.