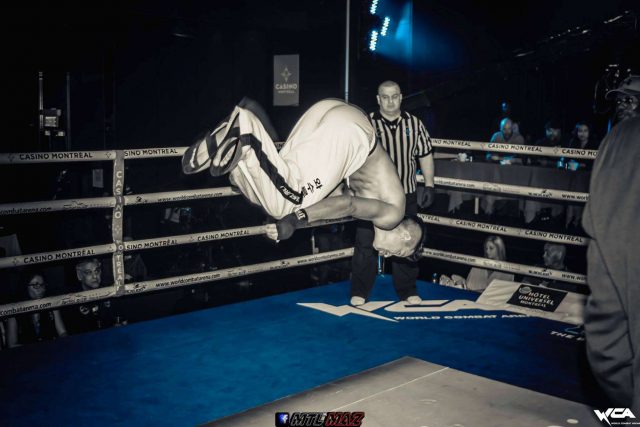 Bradley Bomberry made sure to seal a solid coin in his first competitive kickboxing fight Monday at the Montreal Casino as part of the Fraser Core-Fit fighting crew. (Courtesy MTL MAV)

Monday night at the Montreal Casino, Bradley Bomberry stepped into the ring at Aisudan: the World Combat Arena, and used a blend of speed, power and agility to take his first win as a kickboxer.

“It was a good experience; it was fun,” said Bomberry. “When I first walked in, I was pretty nervous, but it went away as soon as I got in the ring.”

In Bomberry’s first fight, he focused on not being too aggressive, and putting himself in a position for Mike Nickles, fighting out of Detroit, to take advantage.
“Just staying safe and defence, mostly,” said Bomberry.

Bomberry’s best friend Justin Prince was ringside Monday night, and is another fighter in the crew from Fraser Core-Fit, run by coach Mark Fraser. Prince fought a month prior and will be at next month’s gala at the casino.

“It’s a great experience,” said Prince. “He’s the one that started everything off.”

Prince lost in a disqualification, but his coach said it is not about the result when starting off in the ring.

“If you look at it, it’s not really a loss,” said Fraser. “If you walk away with experience and knowledge, it’s never really a loss; it’s more a gain. The exposure that he had the first time stepping in the ring, fighting at the Montreal Casino, I would never call that a loss.”

Bomberry comes from a line of fighters in his family, and was a natural to take his first win.

“Growing up in Akwesasne, my older brothers always fought, so I got into it after a while,” said Bomberry, whose brothers Kane Oakes and Kylan Bomberry fought mixed martial arts.

Mother-of-four Karley Diabo was set to fight Melanie Roy of Drummondville Monday, but pulled out after a death in the family.

She is 1-0 after winning her first fight in September and has her eyes squarely focused on the next gala November 16.

“It was good,” said Diabo of her first fight. “I was just really focused and ready.”

Diabo is a multi-sport athlete, and has embraced the sport.

“It suits me,” said Diabo. “I like to do this. I’m passionate about kickboxing, and kicking ass.”

Diabo’s coach was excited to put her in the ring, as he has seen her development since a young age.

“Karley’s been training with me since she was five or six years old,” said Fraser.

The fight bug seems to run in the family, as Diabo’s five-year-old twins have also started to train with Fraser.

“She’s setting the perfect example because the twins now are in Tai Kwan Do,” said Fraser. “They want to kick ass too. I think it’s great. The women pool of fighters is very shallow, and it’s a great opportunity for women to go there and showcase their talents, and show they’re equal to their male counterparts.”

Fraser said he would like to eventually bring a kickboxing or Tai Kwan Do event to Kahnawake, but for now is happy putting his team of fighters into the ring in Montreal. The next event is November 16, and Bomberry, Prince and Diabo should all see action that night.

“They’re awesome,” said Fraser. “They work hard. They train five days a week, and they rest on the weekend. If they show up and put in the work, then the results are going to be there, and the results are speaking for themselves.”