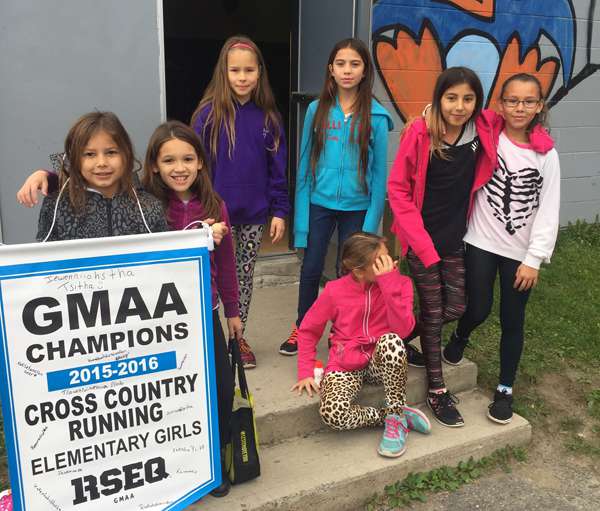 Karonhianónhnha School proved it has a killer crop of swift female distance runners as it took as a team. (Daniel J. Rowe, The Eastern Door.)

Kahnawake was all over the tops of the results’ lists from elementary and high school at the Greater Montreal Athletics Association (GMAA) cross-country race last Thursday.

Melissa Stacey, running out of Kuper Academy, tied for second in the Bantam Girls 2.2K race at 9:01, five seconds ahead of classmate Watewennenhawihtha Goodleaf, who came fourth at 9:06.

“It was cold, and had a really big hill, but we trained hard for it, so it wasn’t that bad,” said Goodleaf.

It was Goodleaf’s first year running against high school girls, and she has already proven she can adapt to competing at the higher level.

“It’s a challenge to try to beat the older girls, but I trained hard so it wasn’t that difficult,” said Goodleaf, who also plays for Kuper’s undefeated Bantam Girls soccer team.

Kuper came first as a team in the Bantam and Midget girls’ categories, and first in Bantam boys.

In the Midget Girls 2.7K, “catch her if you can” Kendall Horn finished at 10:32 ahead of the pack by a solid six seconds running for Kuper.

“I was really nervous because everyone has high expectations for me,” said Horn. “My strategy was to get a good lead, then keep my pace for the remainder of the race. I refuse to let anyone pass me.”

Multi-sport Kahnawake Survival School athlete Kanerahtens Bush came fourth in the Juvenile Boys 5.4K finishing at 20:36. Bush, and all racers who finished in the top 10, qualified for the provincials.

“I want to go to provincials if we can go this year because last year I got fourth and we didn’t have enough monitors,” said Bush. “The race went well, but it was a bit confusing because it was a new course we had to run, but it was good.”

The future is indeed bright for Kahnawake’s cross-country runners, as the community’s elementary school athletes placed in large numbers in the 2.2K race.

Karonhianónhnha School and Kateri School sent runners to the race, and took home first and third for the teams, respectively.

It is the first time in the school’s history that Karonhianónhnha took home a GMAA banner. The female team was made up of 11 solid runners from grade four and five and one from grade three.

“I was nervous, but all you’ve got to do is keep on going until it’s done,” said eight-year-old Ieriwahsetha Dailleboust, the youngest girl on the team, who came in 10th overall.

Leading the pack for the school was Kanonhkwatsheraienthos Stacey, 10, who stumbled to start the race, but passed the pack and finished first.

“I was last at first,” said the younger sister of hockey phenom Brooke Stacey. “I tripped over some people’s feet. (Then) I just sort of cut through. They all started walking up the hill.”

One runner she passed was Ieiatanoron Phillips, who finished a solid sixth at 10:08.

Stacey finished in 9:19, a full six seconds ahead of Katherine Galli of Royal Vale. Karonhianónhnha beat Vale by two points in the team category.

For the boys, the top runner from Kahnawake was Tehorahkwaneken Albany from Kateri School, who finished in 9:04 and placed 11th.

Kateri finished fifth for the boys and Karonhianónhnha was right behind in sixth.