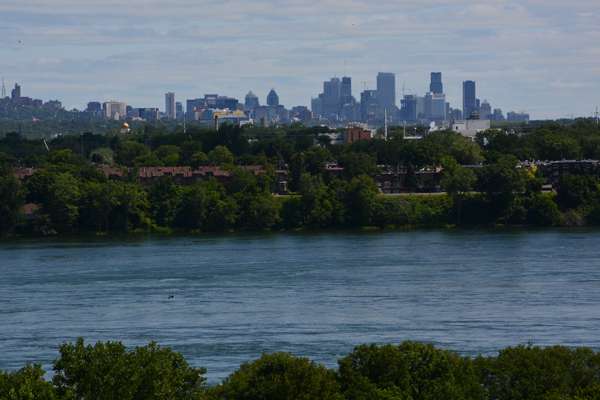 The plan to dump eight billion litres of untreated sewage into the St. Lawrence River continues to draw criticism from both sides of the river, and it just got political. (Daniel J. Rowe, The Eastern Door.)

Environmental, political and grassroots groups are lining up in Kahnawake objecting to the city of Montreal’s plans to dump eight billion litres of sewage into the St. Lawrence River.

The city of Montreal has said repeatedly that the demolition of the Bonaventure Expressway is forcing the city to move a major collector for snow melt, and that will require the city to drain the basin and all pipes along the city’s sewage system, which is about 30 kilometres. Quebec’s environment ministry approved the plan.

Starting Sunday, October 18, the city planned to pour about one-third of its raw sewage from storm drains, homes and industry into the St. Lawrence.

The Kahnawake Environment Protection Office (KEPO) and the Mohawk Council of Kahnawake sent letters to the city urging Montreal’s higher-ups to consider other options. Neither has received a response yet.

Dumping sewage into the St. Lawrence River is something that happens in case of emergency.

“I do understand that communities, from time-to-time, do have to do that for emergency situations in a last, last, last resort, but this, the sheer size of eight billion litres, our river may never recuperate from that,” said MCK environmental portfolio chief Clinton Phillips.

Ragaz explained that Montreal has many combined sewers where waste and storm water go into the same pipe.

“In a big rain event, you overwhelm your treatment plant and then you have discharges of sewer directly into the river, bypassing the treatment plant because there’s so much flow and it can’t handle it,” he said.

“That happens from time-to-time… The big difference here is it’s something they’re planning to do ahead of time, which is causing the bad optics for sure.”

Montreal did similar dumps in 2003 and 2007 that Coderre said Ottawa approved of both times. The mayor is accusing the Conservative party of Stephen Harper of playing politics and trying to score points for the upcoming, tightly contested federal election.

Politics aside, a grassroots group in Kahnawake held a meeting last night to discuss the situation and is planning a protest in Montreal this evening at city hall. For more information contact the “Protectors of the St. Lawrence” Facebook page.

City officials and environmental scientists have said the dump would not have a catastrophic effect on the environment, and Ragaz could not say for certain what the effect would be.

“In terms of the impact, it’s difficult to say,” said Ragaz. “Certainly the amount of the discharge seems quite large, the river itself is also very large. The one thing I have a big concern with is the optics, and the city of Montreal should be an environmental leader for everybody else. Trying to do something like that kind of makes everybody else go, ‘what’s the point?’”

A sticking point for Ragaz, Philips and now Aglukkaq, is why other alternatives are not being talked about.

Aglukkaq quoted the act to Coderre, who suggested the minister look at other communities in the Great Lakes region who have done similar things.

A petition opposing the plan currently has over 70,000 signatures.

The area where the sewage would be dumped is upstream from Kahnawake, and will not affect the community’s drinking water if it goes through, according to KEPO.

“We have a very effective treatment process for the water that we take from the river, so there’s nothing to worry about from a water consumption perspective,” said Ragaz.

Phillips remains annoyed that Montreal would even suggest something that could disrupt the waterway he feels is already under threat from industry and other issues.

“Things have changed,” said Phillips. “This is not the 1950s. It’s no longer acceptable to be doing things of that magnitude into what’s already a fragile ecosystem.”